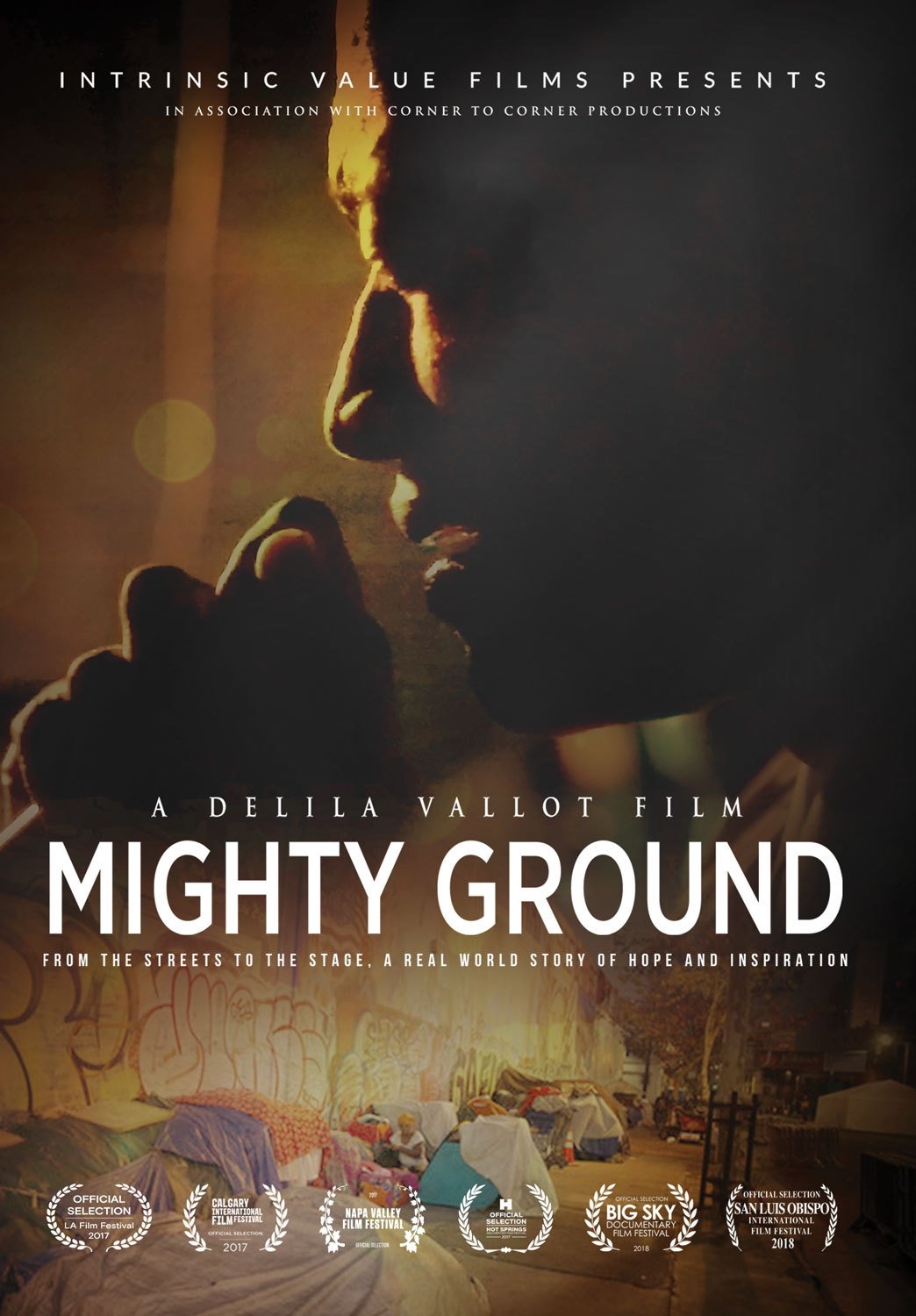 MIGHTY GROUND follows the journey of Ronald Troy Collins, a gifted songwriter living on the streets of Skid Row, and the impact he makes on those who come to love him..

In the throes of an ingrained crack addiction, after twenty-seven years in and out of prison, Ronald Troy Collins lives a life on the streets of Skid Row in downtown Los Angeles. To get by, he sings to people for money. Most folks pass him by, thinking he’s just another guy begging for money, but the people who stop to listen, find themselves in a state of kismet; dancing, laughing, captivated, awe struck, or sometimes, in tears. It’s from the streets that he has attracted these listener’s, but from an otherworldly place that he has conjured up his deemed, “board of directors;” a hipster journalist couple fresh out of college who sometimes let him crash on their couch, a rapper and a movie producer, a menagerie of vocalists, a liquor store owner named Papa and a music producer who will produce his very first album, not to mention a film crew, all brought together by the soul-connection they’ve encountered with this man. Ronald continually mystifies his audience with his beautiful and prophetic voice; it’s tonal qualities echo the darkness of his past and present circumstances, and yet the accounts of his audience allude to a certain unnamable magic. In his song is a personal message meant just for them, a song that speaks directly to one’s soul, engendering quick bonds with others that cross racial and economic lines. This is an auspicious time in the life of this man, when the quality of love from the people he has sung into his life offers a unique opportunity for personal redemption and transformation. But before his story of reclamation can unfold, he must continue in his journey of recovery and hold onto the new team of loved ones he has conjured up.

Mighty Ground follows the journey of a gifted songwriter named Ronald Troy Collins, a homeless man living on the streets of Skid Row, and the impact he makes on those who come to love him. A living example of redemption and what it means to transform oneself from rock bottom.

Panhandling and dirty tent rows overwhelm our neighborhoods while finely crafted media drives the point home. We become more apathetic but it’s too hard to ignore. As this human rights crisis grows, this story picks up where the stats left off. Mighty Ground follows the life of one man Ronald Troy Collins and the impact a handful of people have on making his dreams a reality.

In January of 2016, out late one night in Downtown LA, a homeless man approached us and asked if he could sing for us. While the rest of our group returned inside upon his arrival, we stayed and listened to Ronald singing a capella for almost 30 minutes. At that moment, we knew in our hearts that the connection we shared was bigger than us and that he would be in our lives for a long time.

The intensity of his experience on the streets is projected through the pain and depth of his voice. Ronald’s transition from the streets to the stage is a real world story of hope and inspiration.

News & In the Press